Rumor has it, rapper, Kanye West is planning on moving to London, England to concentrate on his fashion career. If you didn’t know, Kanye has released a clothing line called DW*. He made his collection debut at Paris Fashion Week earlier this year.

Apparently Kanye held a party in the UK for his line just before he returned back to the states for Christmas. A source tells the UK tabloid, The Sun “He’s close to the lecturers and students at the Central Saint Martins College and being in London means he can stop by for advice any time … He’ll be over here preparing his Paris Fashion Week show, due in March. He’s also been looking for a studio.” 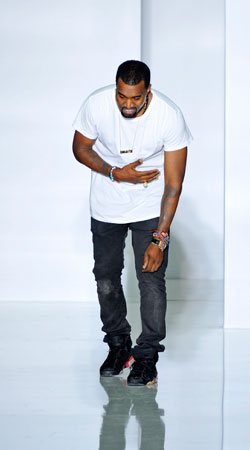 If these rumors turn out to be true, would we be seeing a lot more of Kanye the designer than Kanye the rapper?

Complex Mag has officially announced their 25 Most Stylish Celebs of the year, surprisingly one of my fave rappers Kid Cudi has made the list. Woot woot! But along with Cudder himself, many other artist and actors have made the list as well, such as Kanye, Ryan Gosling, Childish Gambino, and many others. Check it out!